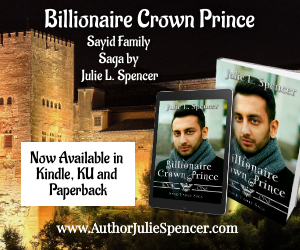 Crown Prince Marcos Sayid is thrust into an arranged marriage with the feisty Hazel Marie Cohen, who thinks he’s a spoiled rich prince and refuses to even give him her phone number.

A series of shocking revelations takes Marcos across the globe and back, all while he’s hoping to find his place in the royal family, and his future queen.

His best friend and royal advisor, Alexander Cohen-Stephenson, once a typical college guy, had no idea he was heir to the Cohen fortune. When Alex learns of a government scandal, he finds unlikely assistance to catch the culprits from the spunky Krystina Clark. Unfortunately, there’s a huge possibility she could be involved with the scandal, and an even bigger possibility that Prince Marcos and Alexander will be implicated as well.

When Alex wakes from his coma, he’s challenged by the cynical and sarcastic Ellen Alaunus, a girl he would never have given a second glance had she not been standing at his bedside charged with the task to help him tell the story of his near-death experience.

Meanwhile, Gus still has to face the consequences of driving while intoxicated by doing community service under the watchful eye of Phoebe Harris, the one girl who ever turned him down.

When King Sayid finally passes away, the young princes are forced to re-evaluate how they represent their kingdom and agree on who will abdicate the throne and who will carry the mantle as King of Madain Saleh.